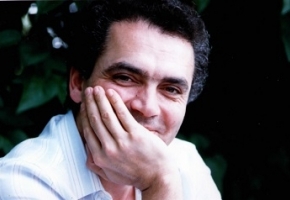 1 mov 1968.mp3
2 mov 1968.mp3
3 mov 1968.mp3
1 mov 1993.mp3
2 mov 1993.mp3
3 mov 1993.mp3
Two recordings of Mozart’s Third Concerto – the earlier one from 1968 and the later one from 1993. In the later recording, there is a kind of mystery and it is difficult to decide what to like more: the violinist’s dazzling brilliance of ‘68 (could you wish for more from a 22-year old violinist who plays THUS?), the joie de vivre, when a person sings with all his heart, without thinking, like a nightingale…or, for example, six notes in the finale of ’93, when without missing the rhythm by a hair,  with just sound and vibration, unbearably and painfully compressed, he creates a broken impression, so that you must recall the crack which passes through what? We all remember. This is only a small piece in the composition of another picture. Sometimes you feel astonishment that this is one and the same score.

One measure of the level of a violinist is considered to be the speed of his trill, and in some confusion you follow how the splendid, chic trills of ’68, without losing speed, are clearly shortened and extinguished in ‘93. The note seemingly flutters and flies off, without having bloomed; generally, it is all somehow tense and bright, maybe even too bright. In the second movement his tonic ‘D’ is above the nominal through the entire movement, as if he intentionally is trying to persuade us – and himself – of this brightness, as if it were not self-evident. And then, in the finale, those several very hot notes, in an innocent minor episode, which simply according to the rules must be present in the form of a rondo…in this Mozart, everything is not what it seems.  a joyless joy, an exaggerated (clearly not accidental) major, in which suddenly we are surprised to hear sobbing; only in the cadenza there appears -just as April shows through sometimes in November – that nightingale’s pure music, which has no calculated sense, a willful play of beauty which from the dead silence of the hall is carried off into eternity by the accidentally recorded sound of a train beyond the windows.