… "He literally always felt himself out of place. Out of his determination to hide this, there arose – and I am certain that it was all under his control – that unique, Hirshhornian type of behavior which no one else could get away with: gloomy little jokes – brought from embittered Latvia, which was so-unlike Russia in that respect - within the atmosphere of Neva swamps gathered the gloss of a capital; derision as the normal facial expression; an ability to seem to pay attention, while tying down the speaker with his penetrating, empty look. All of this would be a vulgar farce if performed by someone else, whereas it made Hirshhorn, with his unbelievable violin playing, the center of universal attraction. "Hirsh… Hirsh… Hirsh" was whispered through the whole school, and then through the Conservatory.
"When he was playing, Hirshhorn was an Unidentified Flying Object. A force field formed around him. Airplanes which might try to draw near him would disintegrate. Let’s recall how this looks in American films, where flying saucers land on a country road. Hirshhorn instilled such feelings in us, his young confreres in the profession. And not only in the young ones among us. The violin department of the Leningrad Conservatory presented its achievements to their honored guest, Szeryng: one neat and well-mannered female student and Philippe Hirshhorn. The Maly-Glazunovsky Hall was overflowing with students of the Conservatory, of both colleges and of the specialized music school.
"Szeryng was incredibly well-known and, it was rumored that he would give a public lesson. He sat surrounded by our provincial professors. His fingertips were, in Western fashion, held at the level of his chin. Spine more erect than the mannequin’s in the sewing atelier on the Staraya Marshalkovskaya (entrance from the courtyard). His face bore the expression of royal indulgence. Henryk Szeryng, about whom I had heard numerous times that he was a kindly man in private life, before an audience always overacted a bit. And, it goes without saying, he observed due decorum and kept his poise when dealing with Russkies.
"Already in the second measure Hirshhorn "knocked the arrogance out of the proud scion of Polish aristocracy." He played the first Capriccio of Paganini and the fugue in G-minor. It’s a pity he didn’t play then Der Erlkönig, a piece in which he especially excelled. His usual sneer, cold but merry – of a magician observing the effect he has produced – changed into something malicious. Not on his face, but in the sounds. And, believe me, this is not just a literary pirouette. Something in the Schubertian (Ernstian) Erlkönig was of his blood. As nowhere else, in this piece he gave full expression to his thoughts…"Das Kind war tod." – Hirshhorn said in German with great meaning.

"When he played, he seized the bow frog like a rake with four fingers at once. And they were almost indistinguishable. And of course he had four index fingers on his left hand: identically vibrating at the joints in vibrato, identically developed – a genuine anatomical four-voice texture. Only the wrinkled cushion on the ring finger was cut by a deep scar – in childhood he nearly was left without the phalanx. And what if it was lost?  He’d have found a happier application for his genius. I am convinced it would have shown itself with equal force in any field of activity.
"While listening to the fugue in G-minor, Szeryng went limp: his spine bent over, his neck was extended at a curved angle. Not a trace remained of his monarchical look. It was literally as if someone had licked the famous violinist. Hirshhorn stopped playing. Szeryng ran up to the stage to give the "public lesson" that was promised by rumor. The old rule was reconfirmed – the less your advice is needed, the more willing you are to give it.  No doubt, for the female student who performed before Hirshhorn Szeryng’s remarks would have been suitable"…
"May the Lord spare me from saying that alongside Hirshhorn even the most famous violinists were like puppies, that Hirshhorn played better than they did. But behind his playing there was something radically different. Standing apart – in whatever direction – has as its consequence loneliness. Hirshhorn was deprived of support from those like him since there were no such people. If the opposite were true, he would not have been Hirshhorn. <...>
In the summer of 1965, Hirshhorn officially succeeded, passing through Moscow in the company of some run-of-the-mill violin careerists, in getting selected for the competition in Genoa. In that hot time of year when poplar tree fluff fills the air, I passed the entrance exams for the Conservatory. My mother, who arrived to fuss over me and give me moral support (I was only sixteen), for several days also looked after young Hirshhorn, who was completely alone in hostile Moscow. The three of us ate in the restaurant Moskva, and for some reason he even spent the night with us in an apartment which we rented privately for several days. In the competition, Hirshhorn ended up in second place. The principal winner was Viktor Pikaizen, a 32-year old chap who got around the All-Union audition and was sent to pick up the first prize. It was all in keeping with what is just: for Pikaizen, a real student of Oistrakh, who always took home "silver," this was the last chance to be the winner of the first prize, whereas Hirshhorn was just a kid who would still have a chance to win first place later. Wouldn’t you agree that was honest?  But unconscionable Hirshhorn obviously believed that this was dishonest, and the main thing – smart alec – he did not hide that. Generally speaking, given his organic inability to observe politesse – let’s put it that way – it is easy to suppose how many missteps he’d make along his path of life. There is a category of people who by their nature cannot accept marriages of convenience. Even if it is for their own good. Even in spite of their own wishes which come from their own bitter life experience which we can summarize in a few words: you are a fool, and you have ruined your own life. Belated attempts "to become wise", to start a new life are fruitless. As I already said, Hirshhorn should have been born as an wandering knight of the violin: duchesses would relate to him differently than ministry rats. In the age of Romanticism and sleepless nights seated before a candle and reading Hoffmann, the exotic ideas of great artists were treated seriously." 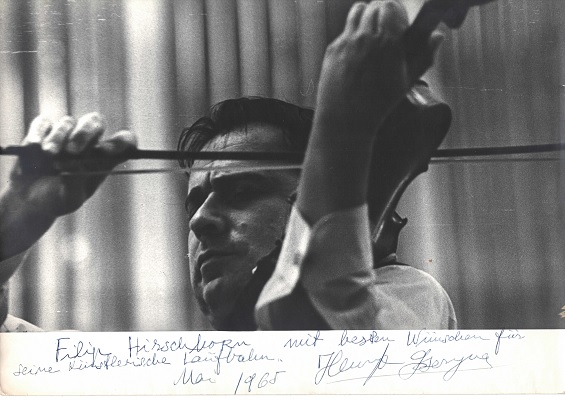