George Edelman
Artistic Director of Ferrara Musica, C. Abbado Theatre (Ferrara, Italy)
Leна Edelman
Musicologist. Based in Paris.
George: – One can speak forever about what kind of musician Philippe was. An artist of immense talent, a genius performer. I am not afraid to use the word "genius," and use it in the noblest sense of the word. In my opinion, Philippe had an innate talent to feel the music in its essential, and his outstanding mastering of the art of interpretation allowed him to find new and captivating way of performing even the most known and often played pieces. It was not storytelling, he did not share his thoughts or images of the music, but made the listener hear it in the more metaphysical and mysterious way, while remaining his own unique and recognizable self. Yes, he heard something in music that we couldn’t hear and I think that he himself did not want to think too deeply about this incredible gift. He told me once : "You know, when I achieve the top level of concentration on stage, everything moves away, only music remains and a clear understanding of what I should do, it creates in public a very quiet, tense and palpable moment of listening. Such moments are extraordinary, they are worth all the efforts, sleepless nights, hours of practice, there is nothing more beautiful. It is breathtaking!"

Lena: – And then there was nothing automatic in his playing. He had such love for music, seemed humbled by its greatness that he played each time giving his all, with total sincerity. He had the talent about which people write, know, speak – but which it is utterly impossible to describe in words.

George: – We have known Philippe the last seven years of his life. In 1987 I organized a festival in Camerino, in Italy and Philippe began coming there every year since 1990. We, of course, knew about him, about his winning The Queen Elisabeth Competition, about his emigration from the Soviet Union, his career in the West, but we became acquainted and grew close in connection with the festival. We began to meet frequently and maintain a close relationship. Philippe traveled on tour by car and if he passed through Paris, he would stop to spend the night at our place. These were wonderful, simple and relaxed moments.

Can you compare him with someone else?

George: – It is very difficult to compare performers. How to measure talent? What should be the criteria? Loyalty to the composer’s text? Mastery of the instrument? Singularity? All of this is imperative. For me it’s important to stop analyzing while listening. I like musicians that are capable to instantly grasp my attention, snatching me from my inevitable prejudice into their unique vision. Such were Carlos Kleiber, Furtwaengler, Benedetti-Michelangeli, Jacqueline du Prè, Glenn Gould. And Philippe.

Lena: – He was a person of perfection, always playing with a great sense of responsibility, regardless of the size of the concert hall, even in some small village…

George: – Yes. By the way, a revealing episode comes to mind. This was, in point of fact, in Camerino. I must say that Camerino is a tiny town not far from Assisi. There is a well-known and one of Italy's oldest university. From the musical point of view it was a God-forsaken place. Despite this fact, musicians who used to come there, still remember the Camerino festival as an unusual event. Why? Well, the audience there was not very numerous and they were not connoisseurs. But the musicians who came there were all friends. They all knew one another, and therefore they all knew that the quality of playing will be evaluated not by some faceless audience but by friends and comrades with whom you are going to have coffee the next morning. That’s why the level of the festival was very high.

At a certain moment a friend living in Canada, a composer, who at the time was quite impoverished, said: "So, you have this festival. Why don’t you play something of mine?" Some time later I spoke with Philippe and said: "I would like to help, but the musicians are so busy, there is so little time to rehearse." I did not have in mind to ask Philippe to play this music, I was always attentive to letting Philippe play what was interesting for him. Yet, he took me up on it and said: "I’ll play it!" Of course, this was a festival, where one has the freedom to try whatever one wants. Philippe very seriously approached the composition of a man he never heard of. He organized the whole process, gathered the musicians and rehearsed the piece as if he intended to discover a long-forgotten composition of Mozart. The great force of perfectionism – "Music and me." This was a very strong engine driving his life. He had his own feeling about what he was doing and how he had to do it.

From the purely human point of view, it was a great loss, and I feel it to this day. Though many years have now gone by, he is one of those people whom I always miss. I miss his refined and witty thoughts about music and musicians, his amazing ability to listen, his calm self-criticism, his real interest towards his colleagues. I can always remember where we strolled, about what we talked, and I always think how sad it is that he is not with us. I would like to recall the time when Philippe was healthy, witty, brilliant, how we smoked together – and he smoked terribly much. I remember episodes from the festival, for example, with Alexander Rabinovich.

Their relationship was not simple. It seems to me that they were attracted to each other by being both extraordinary performers, but their personalities were driven apart like similarly charged atoms.

I remember, when Philippe came to see us after recording the Brahms Trios, i.e., the Brahms sextets transcribed for a trio – which he played with Geringas and Rabinovich. When he arrived, he did not seem to be happy with what was accomplished, he was even a bit depressed, though the recording is amazing. Everyone who has heard it would agree with me. Philippe said: ''Of course, I understand everything, but at a certain moment I wanted to say that the music does not exist only from the standpoint of the piano." He had a certain character trait – and I liked it terribly much – that he was never judgmental. He never condemned anyone, never said about someone, "Ah, he’s this or that." And so it was then – this was a very delicate remark, meaning, "we, of course, did everything, but there could also be another perspective."

There was a time when Alexander Rabinovich and Martha Argerich visited the festival and performed many wonderful things there. It was quite amazing and very pleasant – Martha in Camerino! The next year, Rabinovich said: "I know that Philippe is coming here. Perhaps we can play something together?" And Philippe agreed. They decided to play the Franck Quintet. They rehearsed an entire day. It all was intense and interesting. But when five rather serious musicians are sitting there and when one of them says, "no, not this way, you have to do it this way" - it does not arouse friendly feelings. Still they all put up with it. And then they were on stage. I have this recording, a unique document. They played wonderfully the first two movements. They reached the Finale, very demanding movement. At a certain moment they went separate ways. It was very brief, barely noticeable, but it simply drove Rabinovich insane. I always sat in the first box of the first balcony, just above the stage and saw them directly before me. I saw that Rabinovich was in a thunderous rage throwing annihilating looks at Philippe, and he began, as it were, to take his revenge on all of them, playing faster and faster. And louder! But the composition is very difficult and to race after him was simply impossible. Philippe was the last to try to play along with him – and then his string broke, on the last page. Rabinovich didn’t even turn around! He continued to rush along to the end, and Philippe finished playing the piece on three strings. At the end, they stood up, and instead of taking a bow, Rabinovich goes straight up to my box and says: "I will never again play with this bandit! Everything is canceled!" – though they were supposed to play the next day the Lekeu Sonata. Valery Afanassiev who was also present there, had agreed with Philippe on the spot to play Brahms’s Sonata n. 2. When Rabinovich heard about this, he came to tell me that I should not let the musician who lost his way on the stage, play! But in fact – when I later listened to the recording, but no longer wanted to talk to him about it – it was Rabinovich himself who lost his way! Hilarious! So much virulence. I answered that I like him very much and that everything is fine, but that at this festival I am the one who decides who plays, what they play and with whom. He turned around, walked out without any farewell, and on that day he left Camerino.

Lena: –I later asked him: "Philippe, what do you make of all this?" And he replied: "Yes, it’s always that way between us." I continued: "So why do you play with him?" And he calmly answered: "I forget!" Imagine?

George: – Yes! Yes! That’s what he said –"I forgot!" He forgot with whom he was dealing! But I must say, when the musical partners agree to follow Alexander Rabinovich's lead, he is able to perform divinely. He is a unique musician, and I can understand anyone who is ready to put up with everything, in order to make music with him. Philippe, who was capable to soar to the highest spheres in music, thus created a challenge for Rabinovich.

Lena: – When Philippe arrived at our festival for the first time, we were not yet very well acquainted. I led him into the theater. A rehearsal was going on and he had to wait. He said: "That’s not important for me. I’ll wait here, in the vestibule." I said: "But we don’t even have a chair here."And he responded: "No matter. I’m OK." He very quietly removed his violin from its case, and began to walk around…

Tell us about the Mozart Concertante with Bashmet.

George: – It was unforgettable! And quite unprecedented: Bashmet and Hirshhorn have not played together before. The orchestra arrived in Camerino late that day, the concert program was long, and there was little time to rehearse. Yuri and Philippe only had time to play the beginning of each movement and briefly discuss tempo and a few details. The concert. Philippe was moving while playing on stage, Yuri was like a statue, they didn’t look at each other, both very concentrated and listening to each other attentively. One could feel the stress in the first movement. The enormous talent of both musicians, their intuitive feeling of the music and, most of all, their incredible mastery of their instruments, presented us, the enchanted audience, with an unbelievably inspired, metaphysical interpretation. The second movement is written by Mozart with a "preference" for the viola, which in a dialogue with the violin sounds calmer, warmer, more poised. And we know how magical can sound Bashmet’s viola. But on this evening, exceptionally, the violinist did not yield to the calmness of the viola. Philippe played with such concentration, soaring so high that everyone, including the orchestra, was mesmerized, we were all transported to unknown levels of emotion. I am glad that this concert was recorded and will remain in the history of music. 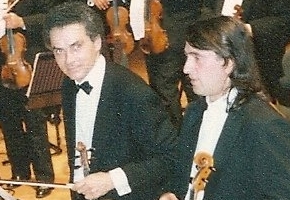