After finding himself once again to be a 'free artist' after his dismissal from the orchestra, Philippe again began to perform in concerts. He later said in an interview that it was hard to name a country where he had not been. He again traveled to Japan and played in Australia. He would come to Lockenhaus and participated in other festivals (Camerino, Savonlinna), and he concentrated all the more on chamber music. At the end of the 80s and beginning of the 90s, he issued three records: with the Brahms quartets and the Brahms trio, as well as the Lequeue Sonata. In 1989, he even went to Moscow – at the invitation of the Vladimir Philharmonic which then took under its wing Alexander Rudin and his orchestra; they arranged short concert tours. This was once again chamber music: in the concert hall at the Nikitskie Gates, where there is now the Great Ascension Church, Hirshhorn participated in the performance of Tchaikovsky’s Trio "In Memory of a Great Artist."
Those close to Hirshhorn believe that his career was on the ascent; he was receiving more and more invitations to perform.  However, at the start of 1994 he suddenly began to feel that his ring finger (in violin terminology, the third finger) on his left hand was no longer obeying his will. Massages, home therapies… no one properly understood what was happening to him, and only the onset of agonizing pain in the head which ended in his being immediately hospitalized forced the doctors to seriously investigate his case. The diagnosis which was issued after scans left little hope, though he was operated upon. After this, he was able at least to return to teaching. The illness went into remission for a time, however in the summer of 1996 it all returned. Due to ill health, he was obliged to immediately return home from master classes where he was then engaged. A second operation in September 1996 was unsuccessful and on 26 November the end came.
Queen Fabiola (King Baudouin was no longer alive) came to the assistance of the family. At her request, permission was given to bury the person she had gotten to know forty years before at the Competition named after the King’s mother in the ancient, long since closed, quiet cemetery in the Commune of Uccle. On the day of the funeral, there was a heavy rain shower which stopped while the coffin was lowered into the grave and then started up again.
Conductor Ronald Zolman tells us that during his illness Hirshhorn once phoned him to say that he had listened to all the cassettes with his recordings that he had. These were recordings, most of which, we note parenthetically, he never allowed to be published.  Summing up in this unusual way, Hirshhorn came to the conclusion that his best concert was in 1990 when he and Zolman performed the Beethoven concerto in Brussels. That day Zolman remembered very well, because then, on the stage, between the first and second movements, gloomy as could be, Hirshhorn whispered to him that those who played like pigs would do better to sit at home – having in mind himself, of course. However, he nonetheless played the concerto to the end and it turned out that the concert was even recorded, so that several years later the performer had to acknowledge rather reluctantly that it really was not that bad. He entered the world of music with Beethoven at age four and with Beethoven he left it.
Atop his tombstone, there was initially mounted a violin made in bronze, but it quickly disappeared.  Another one was installed, but this one also disappeared. Thus, the list of instruments taken away from Philippe Hirshhorn was increased by two more posthumously. Now a violin is engraved on the marble slab. We will hope that no one takes this away. 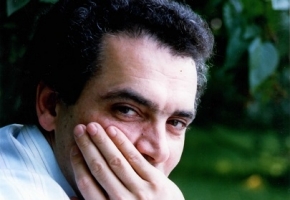