However, Hirshhorn did not stay long in Israel.  After he succeeded in performing several concerts and even participated indirectly in military action during the Yom Kippur War  (the only émigré artist who played for soldiers, see the video), he emigrated with his parents to Belgium The first thing he did once he was in Europe was to go London, to Radu Lupu, for the purpose of learning English. As people have explained, he did this in the following way: he simply sat in front of a television set and watched it non-stop. After a month he was speaking English. Indeed, some people say he was speaking after only two weeks. He learned to drive a car even more quickly –as if he had just sat down behind the steering wheel and drove off!
Thus, in one way or another, Israel remained only a passing phase. First of all, for a world class performing violinist, it was more convenient to be located in Europe.  Secondly, of the three members of his family only his father could be considered Jewish, and Hirshhorn came face to face with manifestations of common place nationalism. People even wrote something unpleasant on their doors. Not long ago, reminders of that period reached us. The photographer Yakov Agar made a whole series of splendid photos. Out of them, only one was published – the one that was later taken by the Harrison and Parrot agency for booklets. The others were discovered in 2014 in the library of Harvard University. 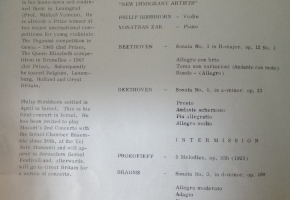 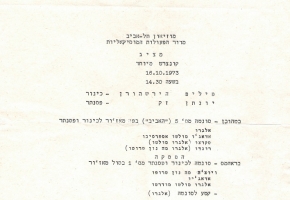